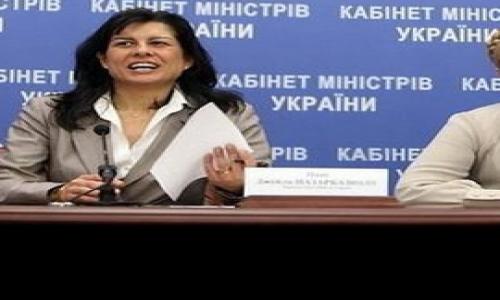 Approved the International Monetary Fund, to provide a financial rescue package for Ukraine worth 17.1 billion dollars, within two years, to help the beleaguered economy. The loan comes at a time when very accurate, especially in light of the political and military escalation between Ukraine and neighboring Russia. The approval came IMF on the loan, based on the conduct of Kiev strict economic reforms, including raising taxes, and raise energy prices. The Ukrainian government will get a share of the first rescue package immediately, valued at 3.2 billion dollars, and the rest of the loan you'll get over the next two years.

She explained Kristen Lagarde, head of the International Monetary Fund; the Fund will be regularly reviewed to make sure that the Ukrainian government is committed to its obligations. The government has raised gas prices by 50 per cent, in March / March last year, to ensure access to aid. It also agreed to freeze the minimum wage. The adoption of the bailout money to Ukraine, with the consent of all the members of the Board of Directors of the Fund, totaling 24 members, including a representative of Russia. Will not affect IMF loan financing, you'll get Ukraine from other donors, and worth 15 billion dollars from the World Bank, and the European Union, Canada and Japan.

The Ukraine has agreed in December / December last year, to get rescue aid from Russia worth 15 billion dollars. But this agreement has been canceled, following the protests that swept the country, and forced President Viktor Yanukovich, the pro-Russia to leave the judgment. The International Monetary Fund warned last Wednesday, that Russia is facing an economic downturn, because of the damage caused by the crisis in Ukraine. He said, "About $ 100 billion has come out of Russia this year, and contribute to US-European sanctions imposed on Moscow, partly in the incidence of this."The United States imposed sanctions and the European Union on Russia, after Moscow Declaration annexation of Crimea from Ukraine last month.

The activists loyal to Russia had taken over government buildings, in several towns and cities in eastern Ukraine, although the Kremlin denied the involvement of its troops in these operations. The abducted activists loyal to Russia also hostages, including international observers. Stationed tens of thousands of Russian troops near the Ukraine, Moscow has warned that its troops would move if it is exposed Russian interests in eastern Ukraine, which is inhabited by a majority of Russian-speaking, to the threat. Washington has accused Moscow and Europe of failing to implement the terms of the Geneva Accord, which aims to disarm illegal militias. While Moscow blames on stirring unrest in Kiev, condemned the sanctions, which target individuals and companies, is facing an assets freeze and travel ban to the West.

The rescue package will allow the International Monetary Fund, guarantees for the loan of one billion dollars from the United States, and recently approved by Congress. Said Jacob Lew, U.S. Treasury Secretary: "the approval of the International Monetary Fund Alahazma aid worth 17 billion dollars, represents a milestone for Ukraine."He added that the market rescue package enables Ukraine to build the progress that has already begun, to overcome the deep-rooted economic challenges, and help the country to return to the path of stability and economic growth.