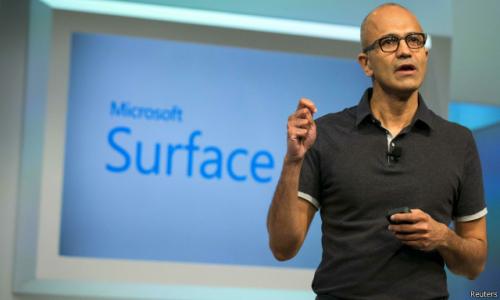 Microsoft Windows versions will unite with a single system

Microsoft said it is working to unify the different parts of the Windows systems to produce a unified system.

He discussed this matter CEO Satya Nadela during a press statement about the earnings report on Tuesday.

Nadela said that the next version of Windows will be the product of an earlier compilation of three systems of Windows and will fit the screens of all kinds.

Microsoft also confirmed the cancellation of the production of a new type of apparatus.

Said Amy Hood, director of financial affairs of the company said that "after re-evaluate plans for the production of our hardware, we have decided not to proceed with shipping a new product was under development."

The leaks indicated that Microsoft was planning to launch a computer "mini-Service" in the month of May / May, and this tablet computer was supposed to be running Windows RT allocated for devices that operate processor type of ARM.

Nadela but did not mention Windows RT, but he pointed to three systems of Windows will be incorporated into a systems that operate on the phone and computer tablet devices and XBOX.

Nadela said, "The goal is to have developers can produce applications that can work on any device, whether a phone or Kompiotra to Ouhaa or desktop computer and even your games."

Microsoft did not reveal until now about the characteristics of the next version of the Windows system that will follow the current Windows 8, but one of the experts that Microsoft may be able to sell the next version easily.

Chris Greene as he said, technical analyst at Davies Murphy advisory group that Microsoft has had problems in the clarification users differences in operating systems on the apparatus, so the unification of all these systems into a single system will make it easier for users to it.