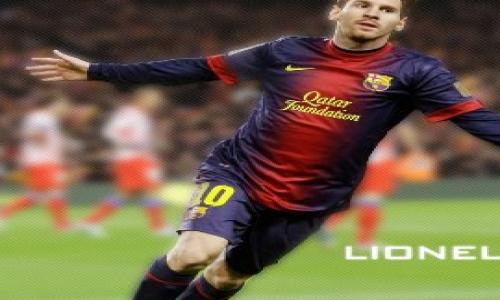 To Lionel Messi, who was named player of the year for four years on a new contract with FC Barcelona.

It was scheduled to continue the deal concluded by the offensive player with the Argentine team Barcelona last February until 2018. It is noteworthy that Messi, 26-year-old scored 41 goals in 43 appearances during the current season. It seems that the contract concluded by Messi takes to become a top player in the world so it will be paid more than paid for the Manchester team player Wayne Rooney.

Signed Rooney a new contract with the team that plays with him last February worth 15.6 million pounds in the year to exceed his income came to Real Madrid player Cristiano Ronaldo, who reached 14.25 million pounds and income Messi, who was then 12.08 million pounds before he signed the new contract, according to a list Forbes magazine on the world's rich. The team said Barcelona in a statement that his new contract will be signed during the "next few days".

The announcement comes in the wake of lengthy negotiations between the two sides. Media reports said that Messi wants to become a top player in the world paid. The Spanish media that Messi will stay with Barcelona for an additional year, until June 2019 and his salary would be 20 million euro’s (16.3 pounds), as well as rewards good performance. Messi scored during his career, which began in 2004 with the Barcelona team 342 goals in 405 appearances.