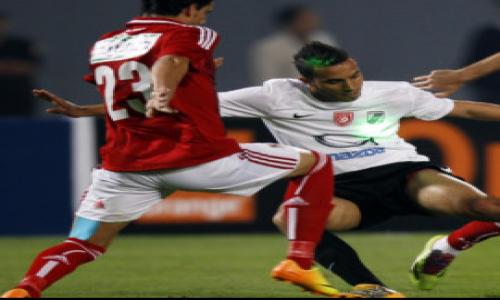 NBE qualify despite losing the quarter-finals of the Confederation Cup

Assassin aim of seconds in the last of the player Ahmed Abdel Raouf Al-Ahly club qualify for the quarter-finals of the League Cup African (Confederate) despite losing two goals in front of goal defense Hassani Moroccan court within the last 16 round of the tournament. The first leg had ended in favor of the clean-Ahly in Cairo with the aim of becoming the aggregate goals for both teams.

But Ahli benefited from the base of calculation of the target on the opponent's court with two goals to qualify for the next round. The game was on its way to resolving two straight for the defense Hassani. Difaa scored his first goal in the second minute and sixty penalty shot successfully player Ahmed Chaco. Then he added, player Jean Ngoolama second goal in the eighth minute and seventy. But the player Ahmed Abdel Raouf goal clinched the Egyptian team in the fifth minute of stoppage time to seal the win.